The Vulcan is a precision gaming tool that lets you sense its performance from the first glance and the first key stroke. Developed following the renowned principles of German design and engineering, it is the best keyboard ROCCAT has ever built. 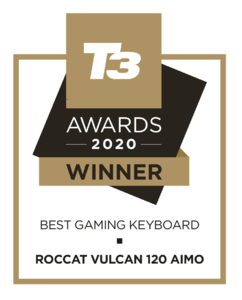 "8/10 - (...) a superb keyboard that benefits from excellent construction quality and offers a wide range of customisation features. “

The Vulcan is the first keyboard to feature ROCCAT-developed Titan Switches. The switches, designed from the ground up, were built for gamers craving a key stroke that was swift and precise while still being tactile. As well as a tactile and silent 1.8mm actuation point with a 3.6mm travel distance, the switches feature structural housing to reduce wobble while being pressed. They bring electrical contact bouncing to a minimum, allowing firmware to recognize input 20% faster. The key caps are also ultra-light – 50% lighter than standard – for that rapid response. Learn more

The Vulcan provides the best possible platform for the AIMO lighting engine. Each switch features an individually configurable, long-life LED capable of displaying 16.8M colors in a variety of special effects. Transparent switch housing means the multicolor lighting shines impressively and is spread evenly from every key. AIMO represents both a lighting engine and an eco-system at once. Its functionality grows based on the number of AIMO-enabled connected devices. It reacts organically based on your usage, presenting state-of-the-art illumination scenarios without the need for configuration. Learn more

The palm rest adds a subtle level of comfort and support. It’s ideal for gamers who tend towards lengthy sessions and want their performance in tip-top shape throughout. With mixer-style media keys and wheel you’ve got sophisticated function as well as comfort.